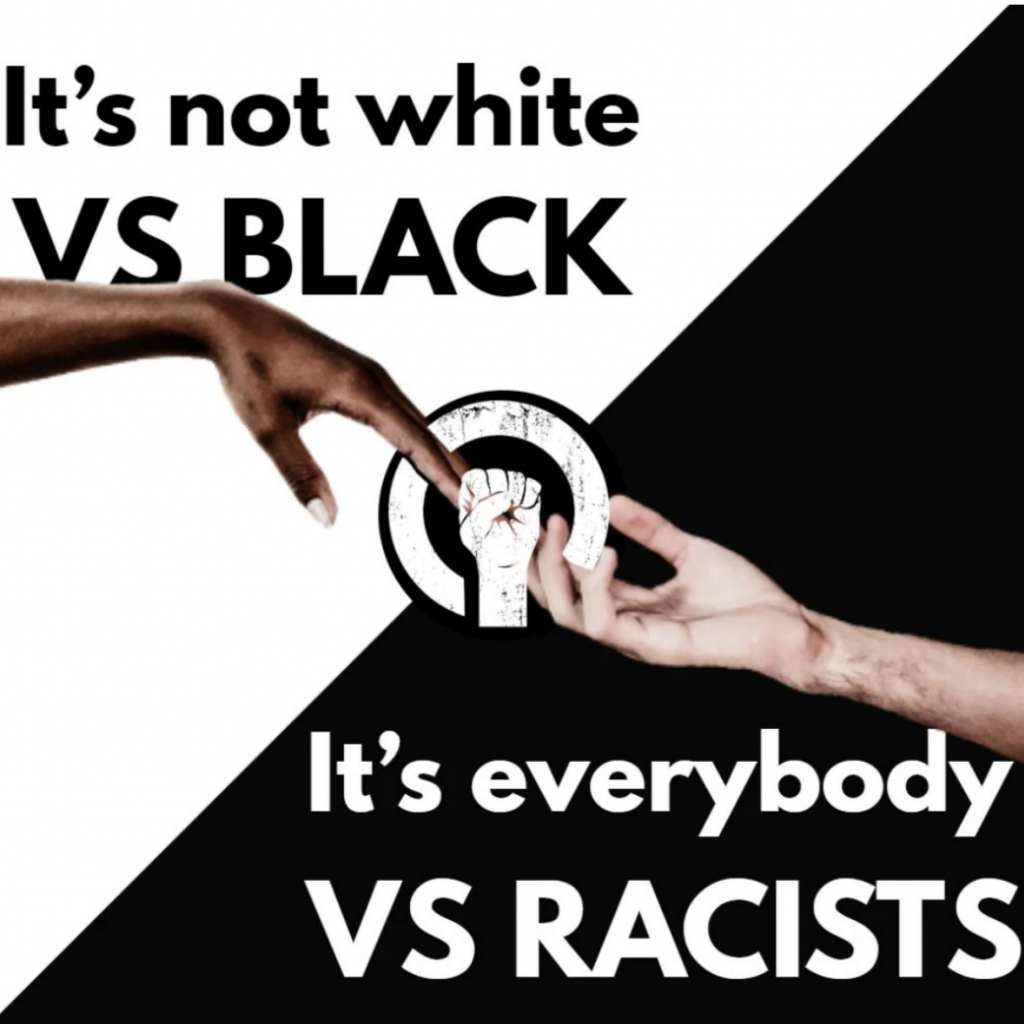 I am white. I have two children of mixed race. Their father is African American. I have benefited from white privilege all my life, generally without even knowing it, as all white people do. My ex-husband and all my black family have not. They have all suffered different types of racism and discrimination; some more overt than others. No one should need to assert that Black Lives Matter, it should be a given. It’s not. It needs to be asserted, and not just by black people.

In London in the ‘90s the only way for my ex-husband and I to get a taxi was for me to stand on one corner and him on another. I would watch as the taxi driver turned off the light as they passed him and immediately turn it back on and stop for me. He would then jump in. There are plenty of other examples. It was bad enough then and I still don’t want that for anyone, my children included.

It’s nearly 30 years since the horrific beating of Rodney King, a black man who had tried to evade arrest, was caught on camera. Four white LAPD officers beat him for 15 minutes, fracturing his skull and causing lasting brain damage, while a dozen other officers looked on. Unusual for the time, video evidence made it impossible to ignore and the four were prosecuted. Following their acquittals by a jury consisting of nine white people, one Latino, one bi-racial and one Asian, there were racially motivated attacks, rioting and looting in predominantly black neighbourhoods. More than 40 people were killed.

It was a pivotal moment. Things had to change.

Nearly 30 years later some things have changed, some haven’t. These days examples of police brutality in the US are regularly caught on camera. But mappingpoliceviolence.com records that still fewer than 2% of US police killings recorded 2013-2019 resulted in a conviction. In 2019, 24% of police killings were of black Americans despite black people accounting for only 13% of the population. George Floyd is one on a long list. A white police officer knelt on his neck for nearly nine minutes after arresting him on suspicion of passing a counterfeit $20 bill, as three other officers looked on. His last words were ‘I can’t breathe’.

It’s a pivotal moment. Things have to change.

This time the protests are in predominantly white neighbourhoods and of mixed ethnicity. Whites uniting with people of colour instead of against them in the fight against economic disparity and endemic, institutionalised racism. White privilege is joining the fight against white privilege at the highest levels. This is not a ‘white saviour’ moment. This is everyone of all colours uniting to say enough is enough. They say old white men run the world. There isn’t much evidence to dispute this fact currently.

This time the protests are not just in the US. As in the ‘90s, they are not just about police brutality. And this is not just an American problem. Statistics make unpleasant reading in the UK as well. The Equality and Human Rights Commission in the UK notes that black people have double the unemployment rates of white, those with degrees earn 23% less than their white counterparts and so on. They are three times more likely to be prosecuted and sentenced than white people and more than three times more likely to be murdered. COVID-19 is also more likely to kill black people, most probably due to socio-economic reasons rather than physiological ones but that remains to be determined.

My daughter has just finished her first year at university in the US and has come back with a greater awareness of her own colour and all the implications that has. I found her in tears the day the protests started. Disbelief at what was happening and a sense of frustration, anger and impotence. But she can’t change the world on her own.

This time we are not witnessing a moment, we are part of a movement.

Already there are signs that things can change. In the last few days some US police forces have banned dangerous holds and other officers will now have a duty to intervene. The NFL has finally admitted that it was ‘wrong’ to ban player protests. So while the President of the United States continues to use the crisis for his own political benefit – and I’m not sure what is more shocking, that a president would do that, or that there is political benefit to be had from his attitude – the people who can make changes are starting to lead by example.

We need to educate ourselves, our friends and family. There are so many posts on social media with resources, ideas and ways to make a difference. It’s not enough to say we are not racist. We need to be anti-racist. An ally. My two before they knew about racism and discrimination.

Rachel's blog can be found below.

If you or someone you know is in immediate danger please call 999.

If you are struggling with suicidal thoughts reach out to the Samaritans at: